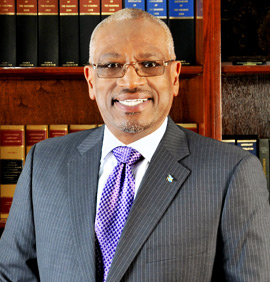 He obtained his early education at Our Lady’s Primary School, Western Junior and his secondary education St. Augustine’s College, Nassau from which he graduated in 1971.

Dr. Minnis served as a Consultant and Head of the Department of Obstetrics and Gynecology and Deputy Chief of Staff at the Princess Margaret Hospital, Nassau, Bahamas. He had a stellar medical career in both the public and private sectors where it is estimated that Dr. Minnis delivered over five thousand babies.

He also served as President of the Medical Association of The Bahamas (MAB); member of the Government appointed Medical Council; Chairman of the Hotel Corporation of The Bahamas and was an associate lecturer at the University of West Indies in Obstetrics and Gynecology.

The Hon. Dr. Hubert A. Minnis was sworn in on May 11, 2017, as the fourth Prime Minister of the Commonwealth of The Bahamas, having been elected to office by an overwhelmingly majority in the May 10, 2017, General Elections when his party, the Free National Movement, captured 35 of the 39 seats in the House of Assembly.

A Roman Catholic, Dr. Minnis is married to the former Patricia Beneby and is the father of three children and five grandchildren.

An expert cowbeller for the celebrated Junkanoo group, the Saxons Super Stars, Dr. Minnis enjoys “rushing” on Bay Street during the annual Boxing and New Year’s Day Junkanoo Parades. His other interests include reading, working out at the gym, and spending time with family.