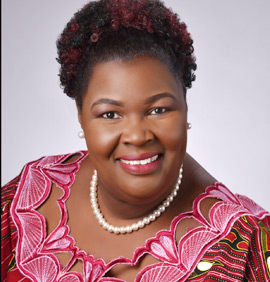 Dr. Jacinta Higgs, Alumni Achievement Award in Education
Dr. Jacinta M. Higgs is a 1983 graduate of St. Augustine’s College where she experiencedthe most powerful training and mentorship from many of the teachers. She fondly recalls the wise counsel and positive life lessons she received from Geography Teacher, Mr. Winston Carter, Sr. Margaret McEntee and Principal, Deacon Leviticus “Uncle Lou” Adderley, who later became her father role model when he served as Deacon at St. Anselm’s Church. Jacinta is the daughter of Benjamin Mackey and Coral Marie Mackey nee Ferguson (both deceased) and the sister of four brothers and two sisters.

Dr. Higgs was recently appointed as Director of Gender and Family Affairs in the Ministry of Social Services and Urban Development where her portfolio includes making national, regional and international representation for Rights and Equality for Women and Girls living inThe Bahamas. Additionally, she is charged with the responsibility of promoting unity, equity and parity for men and women within the context of families. She is a 35-yearBahamian veteran educator and mentor to thousands of students throughout the Commonwealth of The Bahamas. In 2011 Dr. Higgs became founder and CEO of Akhepran International Academy located in the heart of Fox Hill Community where her maternal families of the Brice, Davis and Ferguson clans have their ancestral roots. Dr. Higgs celebrates that she is an alumna of St. Anselm’s, Sandilands Primary and L.W. Young schools. She served as aFox Hill Free National Movement candidate in the 2007 general election and later as Senator in the Parliament of The Bahamasas well as Chairperson of the Clifton Heritage Authority from 2007 -2012. She is a former lecturer at the College of The Bahamas in the School of Educationandformer Director of Education at Omega College, Bahamas.

Upon graduating from SAC,Jacinta received a Teacher Education Scholarship to attend College of The Bahamas where in 1987 she earned anAssociate of Art Degree in Science and Agriculture and a Teacher’s Diploma from the Joint Board of Teachers. In 1996 she completed a Bachelor of Education Degree from the University of the West Indies in the subject disciplines of History and Literature. In 1997 Dr. Higgs was awarded Teacher of the Year for R.M. Bailey School and Teacher of the Year for the South East School District. In 1998 she successfully advanced as a National Teacher of the Year Nominee. She earned a Master of Arts Degree in Curriculum and Instruction in 2001, and a Doctor of Education Degree in 2006 both from University of St. Thomas in Minnesota.

Dr. Higgs is a well-known community organizer, cultural activist, and philanthropist in Fox Hill Community. She is a former member of the Catholic Board of Education, and District Commissioner for the Bahamas Girl Guide Association. Dr. Higgs is married to Dwight Higgs Sr. a 1978 graduate of SAC and they are the proud parents of three successful Beings, including Dwina Higgs and two of whom are also scholars of SAC: Cecilia Higgs Okwesili and Dwight Christopher Higgs. Dr. Higgs shares that on 7 January 2018 her life spiritually transformed after the birth of her only grandchild Chioma Peace Okwesili who provides abundant reasonsfor herto live, love and laugh with God’s joy.