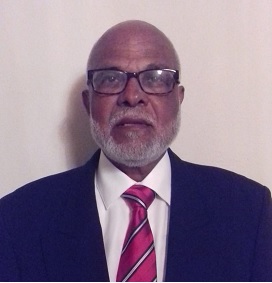 Eugene C. ‘Geno’ Nairn, Lighthouse Lifetime Award
Eugene Charles Nairn was born on January 28, 1948 to the late Jestina Irie Forbes and Stanley Theodore Nairn both of Mangrove Cay, Andros, in the quaint settlement of Victoria Point. He is the seventh child and the third living of all his siblings

At a very early age his schooling began in Victoria Point, Andros. His parents moved to Nassau and Eugene was enrolled at Our Lady’s School. In 1963 he graduated from Our Lady’s and passed the entrance exam to start Saint Augustine’s College in Fox Hill that September. His matriculation began at SAC while it was still an all-boys’ institution on a scholarship. The classes were small and focused. Most of the teachers were Benedictine Monks from Minnesota, along with Bahamian priests, who were also Benedictine monks.

While at SAC he participated in all sports except for track and field. He was in Alcuin House and later became captain of Leonard House in 1967. It was in 1967 that the girls joined the SAC family from Xavier’s.

He opines, SAC was the learning ground for many of us, hence the results you see today with many SAC graduates in all fields of human endeavor. He did not have it easy at all while at SAC. In fact, he was sent home on numerous occasions. On occasion the school required his mother write a letter before he could return to class. He recalls that being the first time he wrote with his left hand the letter for his mother because she could not write. Moreover, he never told her about that because he knew what would have happened next and didn’t want that. He reflects that his time at SAC overall was an enjoyable adventure which prepared him for the real world. He graduated from SAC as an Honor student in 1968.

Eugene attended Florida Memorial College located in Miami, FL in 1968 on a scholarship. While there he studied Accounting and graduated with a Bachelor of Science in Accounting in 1972. He later pursued a master’s degree at the University of Miami and completed his MBA in 1979.

In 1972, he returned home and took up employment first at National Insurance Board and stayed there until 1976. He was then employed at BITCO and remained there until 1977. Later he joined Citibank and worked there until June 1980. On July 1, 1980 he entered the insurance industry and remained for 35 years. Today, he still contributes to this industry through training courses for the industry’s agents. He obtained the following designations in the Life insurance industry: from the American College, the Chartered Leadership Fellow; from LIMRA International, the Chartered Insurance Agency Manager, the Live Office Management Association, the Associate Agency Administration.

In 1972, he met Beverly Crawley whom he married in 1977. They are the proud parents of four lovely children, Dorrena, Genaye, Gevon, Geonese. All of them have made their own mark and are doing well for themselves. They have six grandchildren, three boys and three girls.

Geno is a member of Kappa Alpha Psi Bahamas Alumni Chapter, past president of Pan Hellenic Council for Greek letter organization and vice president of our lady’s men’s association. His community activities are as follows: perform grilling for the Nazerette center, St.Martin’s convent, Our lady’s annual steak out, saint Augustine’s College PTA annual steak out.