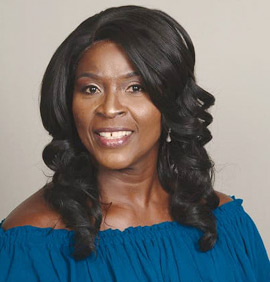 Laverne Eve, Alumni Achievement Award in Sports
Lavern was born and raised in the Fox Hill community to Ms. Albertha Allen and Mr. James Eve, Sr.  (both deceased).  Her educational journey began at the Sandilands Primary School. Lavern then went on to the L.W. Young High School where she was introduced to the shot put at the age of 15.   Upon receiving a scholarship in 1980, Lavern attended St. Augustine’s College (SAC). While at SAC, Lavern continued to excel as a junior athlete, not only in the shot put but also in the discus and javelin.  She participated in a variety of sports while at SAC, being a part of many championships.

Having graduated from SAC in 1983, Lavern continued her education on a Track and Field Scholarship at Eastern Oklahoma State Junior College, where she graduated with an Associates of Arts and Science degree. Being recognized as one of the top college throwers, Lavern was offered a four-year scholarship to Louisiana State University (LSU).  During her time at LSU, her athletic career took off.   Having balanced her roles as student and athlete, Lavern graduated with a Bachelor of Arts and Science in Psychology.

Over the years, Lavern’s dedication and hard work led her to achieving numerous accomplishments. In 1982 and 1983, she won the prestigious Austin Sealy trophy, being the first person to have won the award consecutively.  While at LSU, Lavern set the Stadium and School Record which stands to this day.  She was also the South Eastern Conferences (SEC) javelin champion and record holder, and SEC runner up in the discus and shot put.  She had also earned the titles of All American and NCAA Champion in the javelin.  These accomplishments catapulted her to greater success.

Lavern was a Commonwealth Games gold and silver medalist and has competed in 7 Pan American Games, 10 World Championships and in 5 Olympic Games, being a sixth place finalist in 2004.

In recognition of her many achievements, Lavern was inducted into the LSU hall of Fame in 2015.

Lavern’s abilities and competition opportunities have afforded her the opportunity to travel the world, and these experiences have led her to appreciate life at a greater level.  One of Lavern’s main goals is to give back by sharing her wealth of knowledge from the many years of competing to those who dare to dream.  She believes that “a true champion is one who believes in himself when no one else does” (Sugar Ray Leonard).