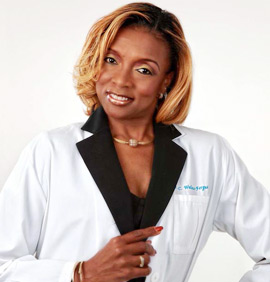 Dr. Charlene Wallace, Alumni Achievement Award in Medicine
Charlene Carmel Wallace, is a distinguished member of the pace setting class of 1980, and a proud SACer-4-life. During Charlene’s tenure at the Big Red Machine, this young Setonite embraced all that her beloved institution had to offer through its academic and diverse extracurricular agenda.

As this young graduate from Woodes Rodgers Primary School graced the hallowed halls of St. Augustine’s College, it was evident to administrators, teachers and her peers, that she was a leader in the making.  She was confidant, goal oriented and focused; destined to do something extraordinary with generational implications.

Charlene immersed herself in the full culture and life of her beloved SAC and was involved in all aspects of the school’s life. She served as a member of the Student Council throughout her six-year career at St. Augustine’s College and in her senior year served as its President. Charlene was a member of the Track and Field, Basketball and Softball teams and in spite of her athletic agenda, she still found a way to be a part of the finearts and performing arts programs and was a member of artistic teams that painted murals; some of which aesthetically enhance facilities such as the Princess Margaret Hospital, even today. It was no wonder then, that she was the recipient of the inaugural and prestigious SAC Principal’s Award at the school’s 1980 Graduation exercises.

By the time Charlene graduated from SAC, her educational pathway was planned, so that she could properly prepare for her lifelong assignment. She earned an Associate’s degree in Biology from the College of The Bahamas (1982), a Baccalaureate in Biology from Canada’s Concordia University (1985), and herOptometric credentials from the New England College of Optometry, Boston Mass (1989).

In 1989, Dr.Wallace returned to The Bahamas and immersed herself in providing national service in the profession in which she was trained. She became the first Bahamian female Optometrist to return to the Bahamas and be engaged at the Ministry of Health and today she yet retains a consultancy as Clinical Optometrist.

Of all her accomplishments, motherhood and parenting of her daughter, Cymphony Carmel, is one of her most cherished roles. The love and joys of raising her daughter,further inspires and propels Charlene to seek new heights and strive to accomplish even greater goals.

Dr. Charlene Wallace, credits her accomplishments to her Heavenly Father and the commitment of a strong and supportive family. The sacrifice of her parents Charles and Angela Wallace and their investment in her life, made all the difference. Now in their 80’s they continue to be her strong tower.