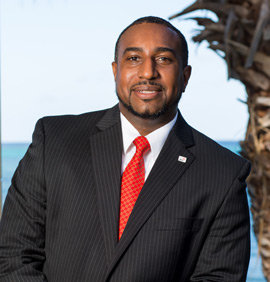 Kevin G. Cambridge was born in Nassau Bahamas on 17th February 1971.  He attended Xaviers Lower School where he graduated in June 1983.  He then attended St. Augustine’s College (“SAC”) and graduated from SAC in 1989.  Kevin then later commenced his tertiary education at Humber College of Applied Arts and Technology in Toronto Canada where he graduated with an Associates Degree as with Honours in Accoiunting.  He then completed an HonoursBachelors Degree at the University of Windsor located in Windsor, Ontario, Canada with a concentration in Accounting.

Kevin is currently theAdvisory Partner at PricewaterhouseCoopers (‘PwC”), Bahamas where he leads the advisory line of services for the Bahamas as a part of the PwC Regional Southern Cluster. He has gained over 20 years of combined experience in the assurance and business advisory services with a primary focus on liquidations and forensic services. His career at PwC has progressed over the years where he started out as a staff associate before moving up the ranks to Senior associate,  Manager, Senior manager, Director of the Advisory unit and now serves as the only Partner in Advisory Services.

He gained his audit services background by conducting both external and internal audit services for local and internationally based clients within various industries for several years subsequent to joining PwC.His insolvency, liquidations and forensics services experience has afforded him the opportunity to lead and assist on numerous insolvency related engagements involving cross-border liquidationswith various international offices including PwC London, PwC United States, PwC Canadain addition to PwC offices located throughout the Caribbean region.

As Advisory Partner,Kevin also plays an integral role in bringing his knowledge and experience to assist in the Firm’s business development strategy where he has led the expansion of both the deals and consulting lines of service within the advisory unit of the practice as a Pursuits Champion.   In addition to participating in various regional initiatives within the PwC Caribbean advisory network, Kevin is also aparticipating member of the Firm’s branding committee, business development committee,Provident Fund committee and also assists with various human capitaland Regional training initiatives as an instructor.

Kevin is a licensed member of both the Georgia State Board of Accountancy and The Bahamas Institute of Chartered Accountants (BICA),where he also served as member of the BICA licensing committee and legislative reform committee.  He is a Court Approved Liquidator and also served as a member of a select committee responsible for drafting the current 2011 Amendments to the Companies Act Winding Up Rules in conjuction with the then Attorney General of The Commonwealth of The Bahamas.  Kevin was a 2011 Nominee for Professional of The Year Award by The Bahamas Financial Services Board and currently also serves as an Executive member of the Barbadian Bahamian Association.

He is member of St. Joseph’s Catholic Church and is married to Tameron (nee Rogers) and the proud father of twochildren Tamera and Kristopher.