BUILDING A LEGACY- HISTORY OF SAC

Saint Augustine’s College was founded in January 1945 by the Very Reverend Frederic U. Frey,O.S.B., the then Prior of the Benedictine Order in the Bahamas, and the school’s first Headmaster from 1945 until 1963. The College was founded in response to a well felt need in the Colony for an environment in which Bahamian youth could have access to traditional Benedictine cultural heritage of 14 centuries. Saint Augustine’s doors were first opened to 35 students in Forms, I, II and III. They were housed in three temporary classrooms in The Niche, with a library in Bungalow Dunmore. The faculty at this time numbered four. This constituted the small but eventful beginning in the Priory Grounds, West Street. 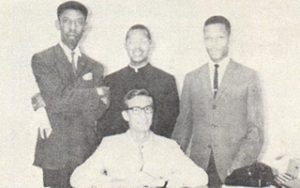 In 1947, the present site of the College in Fox Hill was deeded to the Benedictine’s for a “Monastery and College” by the late Bishop Bernard. The famous “hermit of Cat Island”, Monsignor Jerome Hawes, designed the Monastery and original College complex which dominates the entire campus from the hilltop.

Classes met in the new St. Augustine’s for the first time on January 13, 1947. The scholastic day lasted until 8 p.m. in order to provide a suitable place of study for the students.

At the beginning of the fifth scholastic year in 1949, St. Augustine’s College was granted recognition by the University of Cambridge Local Examination Syndicate as an approved College whose successful candidates in the annual overseas examination were entitled to receive the award of Certificate A.

In 1953, St. Mary’s Hall was completed to house the auditorium, classrooms, library, cafeteria and science laboratories.

From 1954 to 1966, the Headmaster’s Annual Inter School Track and Field Meets were held on St. Augustine’s playing ground, since this was the only suitable place in Nassau for such a programme. With the opening of the Queen Elizabeth Sports Center in 1967, the venue was changed to that locale.

The first Natural History Museum in the Bahamas was started at the College in 1962 under the direction of the late Mr. Robert Hanlon, Biology Master. The College financed collecting expeditions to Andros, Acklins, Long Island, Great Inagua, Bimini, Eleuthera, Cat Island, San Salvador, Harbour Island, Exuma and Ragged Islands. With the construction of a new science complex in 1970, better facilities were provided for a greater study of Bahamian flora and fauna. The last building which the Founder Headmaster, Father Frederic, started in 1963, but did not live to see completed, was the Athletic Building.

The second phase of St. Augustine’s history began with the advent of its second Headmaster Father Burton Bloms, O.S.B., who engineered the building of the new school complex below the hill and initiated the Bahamas first boarding school in 1965 (discontinued 1974). During Father Burton’s tenure, groundwork was laid for the merger of St. Augustine’s College with Xavier’s College. The union was achieved in 1967 and was helped along tremendously by generous financial contribution by the late Most Reverend Paul Leonard Hagerty, O.S.B., Bishop of Nassau. Prior to this, Saint Augustine’s was an all boys’ school run along traditional English grammar school lines. Xavier’s College, formerly an all girls school directed by the Sisters of Charity, was founded in 1956 as an out growth of an academy started in 1889. Xavier’s was also recognized by the Cambridge Local Examination Syndicate.

In 1967, St. Augustine’s College became a co-instructional high school with boys and girls sharing the same teaching faculty, but in separate classes.

Earlier that year, in February, the appointment of an alumnus as Headmaster, the Very Reverend Bonaventure Dean, O.S.B., heralded a new era in the school’s history. Under his supervision, the College became fully co-educational and there was a reorganization of the Administration.. Enrollment has experienced phenomenal growth from 35 students in 1945 to more that 1,000 in September 1968. In 1971 the College reverted to a six year programme with an annual enrollment of 900 students.

Saint Augustine’s, in the words of its founder, was to be a “community institution, an institution to be used for the good of people of the Bahamas. We intentionally have avoided making it parochial in the sense of limiting it to Catholics or using it as a training college for candidates to the clergy.” That this has been the policy of St. Augustine’s College since its opening in 1945 can be seen clearly in its record. This record has been advanced throughout the seventies under the leadership of an old scholar, Mr. Leviticus Adderley, who assumed the position of Headmaster in January, 1973. Father Theophile Brown, O.S.B., had briefly been in this position from September 1971, to December 1972. In July 1991, Ms. Sonja Knowles, a 1970 graduate of the College, was appointed Principal of St. Augustine’s College.

The Administrative titles were changed from Headmaster to Principal and from Deputy Headmaster/Headmistress to Assistant Principal. This is in keeping with the government’s change of titles in the Ministry of Education schools. 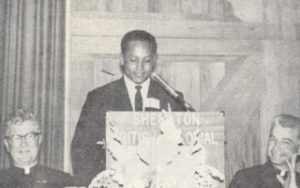 Since 1974, the enrollment has fluctuated between 900 and 1020. Because of the number of students and course electives, our facilities are constantly being up graded to meet the students’ needs. During the 1980’s, there has been expansion to the complex with a Shower Changing room for girls, a Home Economics block and a Fine Arts Building for Music and Art Classes. The Library facility was expanded to include an audio visual room. The new Administration Building was completed in February, 1983 to replace the old one destroyed by fire. The 140’s block which housed the staff room, a biology lab and a regular classroom was destroyed by fire in February 2000. The refurbished building was re-dedicated in November 2001. The building is now called the Benedictine Building in honour of the many Benedictine monks that have served the college from its inception.

As we move forward in the twenty first century , we realize that if our educational success is to continue, we must keep abreast of the educational trends and provide programs which are relevant to the times and society. The first computer lab with thirty (30) computers was opened in September 1990. It was completely refurbished in 1996. In October 1998, the school dedicated two computer labs on the upper campus. The Br. Barry Gearman Lab (Room 44) was named after the Benedictine monk who worked in the college and monastery from 1981 until his death in March 1995. The second lab was named after Deacon Leviticus Adderley. The school now has three computer labs for classes. All students now have computer as a part of their general studies for all of their six years at the school. All students have access to the Internet for regular class and research purposes. The ongoing updating of facilities and development at the school show that the Administration and Teachers are prepared to help our students meet the challenges, which lie ahead.

St. Augustine’s College is operated as an independent school with an independent school board. Prior to this, the College was owned and operated by the Benedictines of the Bahamas, hence its Benedictine heritage and uniqueness within the education system in the Bahamas. The College is a Roman Catholic School whose aim is to promote intellectual, physical and spiritual growth of persons and thereby contribute with wisdom to the welfare of church and society. Its objective is to maintain the Catholic and Benedictine identity of the College as established by its founders.