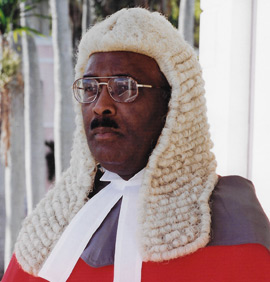 Malcolm Adderley, Distinguished Alumni Achievement Award
Malcolm “Mac” Adderley Jr attended SAC when it was an all-boys school from 8:00 am to 8:00 pm. While at SAC Mac Adderley was a Premier sprinter and dominated the 400 meters in the Junior and Senior Divisions. He graduated from SAC in the Class of 1965 and still remembers those breathe taking duels against the old Government High School while these two giant foes battle to the end for first place in the Annual High School track meet held at SAC.

In 1966 Mac attended University in the United States and competed in many track meets in the College Mid- Western Division. One of the highlights of his Athletic Career was at a meet in East Texas in 1968 when he competed in the 400 meters against John Carlos, one of America’s most talented sprinters in the 60’s, who along with Tommy Smith at the 1968 Olympic Games held in Mexico, while on the victory stand having won 1st and 2nd in the 200 meters, raised their right black gloved fist in protest over racial discrimination in the United States. In 1970, he graduated from the University of Oklahoma with a Bachelor’s Degree in Business Administration. In 1973 he was the first Bahamian to receive a Bachelor of Laws Degree from the Law Faculty of the University of The West Indies, Cave Hill campus Barbados. In 1975 a Certificate of Legal Education from the Norman Manley Law School, Mona, Jamaica; In October 1975, he was called to The Bahamas Bar and after a four year stint in the Attorney- General’s Chambers, he opened his own law firm in October 1979 where he still practices as a sole practitioner.