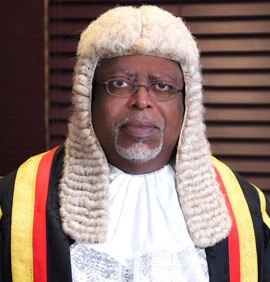 Sir Michael Barnett, The SAC Alumnus of the Year Award
Conferred the award of Knight Bachelor by Her Majesty Queen Elizabeth II in 2009, Sir Michael L. Barnett is one of the country’s leading luminaries of the legal profession.

As a practicing attorney, he was an exceptionally regarded litigator, and the founding Partner of Litigation and Dispute Resolution practice of Graham Thompson, one of the country’s oldest and most prestigious law firms. Sir Michael was a senior partner in Graham Thompson for twenty-five years.

His record of public service is particularly notable. Prior to his appointment as Chief Justice, Sir Michael served as the Attorney General and Minister of Legal Affairs of The Bahamas (2008 – 2009). He has also served as Acting Stipendiary and Circuit Magistrate (1985 – 1988). A former president of The Bahamas Bar Association (1989 – 1991), Sir Michael has also served that organisation in the roles of Registrar of Examinations (1980 – 1985) and Examiner, Law of Civil Procedures (1985 – 1990).

His service includes leadership of public and not-for-profit boards, including the Industrial Relations Board (Chairman, 1993 – 1997) and the Water and Sewerage Corporation (Chairman, 1998 – 2002). From 1981 to 1989, he was the Chairman of the Catholic Board of Education. He was also a member of the Financial Services Advisory Committee to the Prime Minister of The Bahamas (1998 – 2000).

One of the roles that Sir Michael is especially noted for, is that of mentor. So many accomplished Bahamian attorneys speak so highly and so appreciatively of his tutelage;his openness and his willingness to share his experiences and to impart the wisdom of such a full and illustrious career.

Born in New Providence to Mr and Mrs Arthur Barnett, Sir Michael holds a Bachelor of Arts degree in Economics (1974) from Georgetown University in Washington DC. He is a member of the Honourable Society of Lincoln’s Inn (Inns of Court School of Law) in London. Sir Michael was in fact made an Honorary Bencher of Lincoln’s Inn in 2010. In 1978 (July) he was called to the Bar of England and Wales. Later in the same year, he was admitted as Counsel and Attorney of the Supreme Court of The Bahamas (August 1978).

Sir Michael is married to the former Camille Liverpool. They have two daughters Michela and Viola, and one granddaughter, Kamelia. Both of Sir Michael’s daughters have followed him into the legal profession. Like her father, Michela is a partner in the law firm of Graham Thompson. Viola is an associate at the firm of Harry B. Sands, Lobosky& Company.

Sir Michael L. Barnett is a very proud member of the St. Augustine’s College Class of 1970.