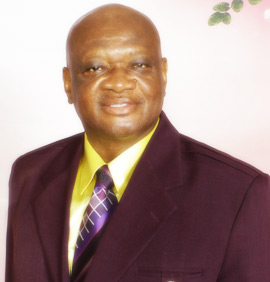 Bishop J. Rodney Roberts, SAC Spirit Award (Posthumous)
On 28th July 1954, James Rodney Alexander Roberts was born at Bullocks Harbour, Berry Islands, The Bahamas, to Geneva Francis and Christopher Roberts (both deceased). At the age of nine, his family relocated to Nassau, where he attended Southern Junior and the Harold Road Secondary Schools.

On January 20th, 1977, he had a Damascus Road while at Bethel Baptist Church and was “wonderfully saved”. He was filled with the Holy Ghost on January 23rd, 1977, and began preaching under that anointing in April of the same year.

His great desire to win lost souls caused him to focus on the Student Christian Movements in various schools, where he worked tirelessly and unselfishly on the mission field for many years.

Bishop Roberts was called to a higher level in ministry when God ordained him to lead Solomon’s Porch Prayer Band, which was established in July 1996, to work full time at the Church level. In June of 1999, God instructed him to change Ministry’s name to Five Porches Of Deliverance Centre, which he did.

Bishop Roberts served as the Senior Pastor and President of Five Porches Of Deliverance Centre Apostolic Tabernacle, the Bishop of Circle Of Deliverance End-Time Apostolic International Association, President of J. Rodney Roberts Ministries and Chairman of the Apostolic World Christian Fellowship Caribbean Region, up to the time of his death.

Academically, Bishop Roberts held a Diploma in Christian Training, a Bachelors and Honorary Doctorate Degree in Theology and was the author of two books, “An Apostolic Father, A Word to Spiritual Fathers and Their Children” and “Son of Destiny”. Also a musician, Bishop Roberts recorded his first CD, “My Soul Has Found Rest” with the Apostolic Mass Choir in 2007 and his second in 2011 entitled, “You Can Make It”.

Bishop Roberts ministered on air in The Bahamas via three radio broadcasts: The last Sunday of each month at 11:00 am on ZNS 107.9 FM, his weekly radio broadcasts, “The Voice of The Prophet” each Monday at 4:45 p.m. on Joy 101.9 FM, and on Wednesday nights at 7:45 p.m. on 810 AM ZNS 3 Radio Bahamas, along with a vibrant television ministry called, “Apostolic and Prophetic Confrontation” on local cable 211 Nassau, Bahamas.

This giant of a leader was married to Pastor Curlene Roberts and they have three biological children: Genèa, Doran and Jakim, along with a number of spiritual offspring.

As a Master Prophet, Bishop Roberts prophesied throughout the Bahamas, the Dominican Republic, the Republic of Haiti and the Continents of the World declaring a message of consecration and total obedience to God. He built his legacy as a Holy Ghost filled Apostle, Prophet and Bishop of God who believed in “Holiness or Hell”. During his sixty-three years, God used him mightily in the Apostolic, Prophetic, Evangelistic, Pastoral and Teaching Offices.

Ghost filled Apostle, Prophet and Bishop of God who believed in “Holiness or Hell”. During his sixty-three years, God used him mightily in the Apostolic, Prophetic, Evangelistic, Pastoral and Teaching Offices.