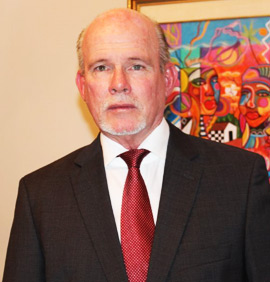 Frederick Albury, Alumni Achievement Award in Business
Lionel Frederick Albury was born in New Providence and spent his young life growing up in the Palmdale area. There he attended Saint Thomas More Primary School from 1958 to 1966. In 1966 he took the entrance exam to enter St. Augustine College and passed.

Upon entering St. Augustine College, which was an all-boys high school at that time with classes starting at 8 AM and finishing at 5 PM, he met and created some of the best friendships that are still with him today.

Life was not easy for a boy from Palmdale but with the support of his humble parents and humble beginnings in life, he learnt the value of hard work. At the age of 12 he started his first job at Nassau Bicycle Company on Bay Street on Saturdays assembling bicycles for $2.00 a day. At the age of 14 he worked as a packing boy at J. D. Albury and Sons Grocery in Palmdale on weekends.

At the age of 16 his brother Jeff became a shareholder in a used car dealership and this is where Freddy found his passion for the automobile industry. At 16 and having earned and saved enough money he purchase his first automobile with the help of his father who worked at Commonwealth Industrial Bank at the time. It was repossession and required repairs and this inspired him to learn as much as he could about automobiles.

In 1971 Freddy graduated from SAC but was unable to attend College so he looked to his passion for automobiles for his future. In 1972 Freddy and Jeff started Quality Auto Sales Ltd by selling vehicles from a gas station that Jeff was involved in. After that the business moved to a location between Elizabeth Avenue and Victoria Avenue and remained there until 1979.

In 1979 Quality Auto Sales Ltd owned and operated by the Albury brothers moved to East Shirley Street where an arm of the AutoMall Group of automotive companies remains today. Up to 1982 used cars remained their mainstay of business but the Albury Brothers saw a change in the market with a shift towards new Japanese vehicles. It was then they decided to try and did obtain the rights to sell Suzuki vehicles for the Bahamas.

After a very successful launch of the Suzuki brand in 1982, Quality Auto Sales was approached by the now giant South Korean automobile brand of vehicles, Hyundai to represent them in the Bahamas in 1983. With hard work and planning along with many ups and downs, Quality Auto Sales grew into a large automobile dealership on East Shirley Street.

In 1987 through a strong marketing program in the Grand Bahama market, he realized that there was a strong demand for his products there. A partnership was forged with another entity and Quality Auto Sales (Freeport) was born. All of the brands in Nassau are represented in Freeport under this one company that employs 21 persons.
In and around 1990 Freddy following the struggles of a competitor, ABC Motors Ltd. who was the distributor for Toyota in the Bahamas from 1965, decided to approach the trading company who handled Toyota for the Bahamas.

Executive Motors Ltd. started with the Toyota brand at a location on Collins Avenue. However, seeing the brand grow along with the other brands, a larger facility was required. In 2002 the former John S. George property became available and with strong negotiating we were able to obtain and convert the property to meet our needs. Money was tight but with planning and time EML was able to relocate to Shirley Street in 2006 where it remains today.

In 2003 Quality Auto Sales Ltd and Nassau Motor Company came together to start Abaco Motor Mall Ltd to represent both companies in the Abaco market.

The AutoMall has pushed for the new and changing technologies to be made available for the Bahamas and is a leader in Hybrid vehicle sales in the Bahamas.

During the years Freddy has been a member of the Bahamas Motor Dealers Association since 1983 serving as a director and as President for many years. He has served on different committees at the Chamber of Commerce.

However, he is proudest to be a member of the Board of Directors of St. Augustine College for about 20 years. He feels that it is his duty to give back to the educational institution that provided him with the basic academic skills to pursue his dreams in life.

Freddie’s hobby is deep sea fishing and real estate development in New Providence and the Abaco’s. He is married to Daisy Moss Albury and has six children and seven grandsons.