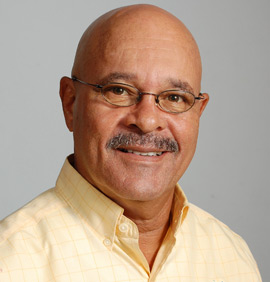 Basil Christie, The Humanitarian Award
Following his early education in the Catholic system, Basil enrolled in the Seminary at St. John’s Abbey in Minnesota.  He later changed his focus to Modern Languages, and upon graduation began his life of Service by volunteering for Missionary work in Mexico.  On his return to Nassau he embarked on his teaching career at Aquinas College.  Following his stint as Guidance Counselor there, he was appointed Director of Religious Education for the Catholic Archdiocese.  Later he took up employment at J. S. Johnson Insurance Agency where he served as Senior Underwriter and Human Resources Manager.

Basil retired in 2004 from his Insurance Employment Career to dedicate his life to the areas of service to which he felt God has called him.  Ever since his return from university he has been involved such service groups as Scouting, Youth Groups, Sporting Organizations and any number of Church activities.   A long time member of the Rotary Club of East Nassau, he was awarded the Paul Harris Fellow Award, the highest honor awarded by Rotary.

Undoubtedly his strongest love is Special Olympics.  For six years he served as Chairman of the Caribbean Leadership Council and Vice Chairman of the North American Leadership Council.  He gave up these international positions recently to focus on the local Special Olympics Bahamas program.  His goal is to set a program in each of the major Family Islands (with programs now in Grand Bahama, Long Island, Eleuthera, Abaco and Nassau).  He can be seen every Saturday morning training with the athletes.

In 2010 Basil was awarded the Queen’s Honor of MBE (Member of the Most Excellent Order of the British Empire).  In 2012 he was appointed Justice of the Peace, a signature and seal he uses on a regular basis to assist those who are not able to afford legal fees for documentation.

In 2013 Basil co-founded the Bahamas Athletic Foundation for the development of athletics in the family island.

Basil’s current project is developing a national program for Blood Donation.  In 2015 he developed the Friends of the Blood Bank Foundation whose goal is to sensitize the Bahamian community on the value, benefits and need for giving blood and to increase donations by 500 per cent.  To date this initiative has yielded over a thousand units.

He is father of two children, Natasha and Basilio, two grand children and 48 godchildren.