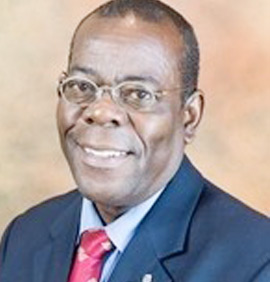 Dr. P. Samuel Bain, Alumni Achievement Award in Education
Dr. P. Samuel received his early education at St. Joseph’s Catholic School in Nassau before entering St. Augustine’s College, from which he graduated in 1970 with a high school diploma. In 1971, he matriculated to the Bahamas Teacher’s College, earning his professional teaching certificate in 1973.

He entered the teaching profession in September 1973 as an English teacher at the S.C. McPherson Junior High School. While working in this capacity, he enrolled in the University of Miami’s Bachelor’s Degree program, successfully completing the Bachelor’s of Education Degree in May 1978. Following this accomplishment, he successfully earned his Master of Education Degree from the University of Miami in May 1984.

He read for, and received his Doctor’s of Philosophy Degree in Educational Administration from University of Birmingham in 2002.

Over the last thirty-eight years, he has served as head of the English Department at S.C. McPherson Junior High School (1976-1978), principal of Lowe Sound Public School (October 1978 to December 1978), principal of Pompey Bay Public School (January 1980 to June 1980), and vice president student and public affairs at Success Training College (1984-2004). He has been an associate member of the faculty of Sojourner Douglass College since 1995.

Commencing in 1995, Dr. Bain integrated 35 years of experience as an educator and his distinguished career as a Toastmaster and motivational speaker to provide customized, personal and personnel training for businesses and community organizations through his multifaceted school, MASTERING YOURSELF INSTITUTE.

After leaving the Public Service in 1980, he worked with the Catholic Board of Education and served a stint as Director of Human Resource Services at the Solomon Group of Companies.

A nationalist at heart, he was a part of the committee, charged with the responsibility for selecting our National Flag. He has served as a member of National Committee for the Prevention of Child Abuse. Civically, he offered for Parliament on three occasions and in the 1970’s forced the government as president of the Bahamas Federation of Youth to lower the Age of Majority, from 21 to 18. In this capacity, he was the chief youth spokesperson and advocate for Independence and served on the National Independence Planning Committee as well as the National Flag Selection Committee.

An internationally accomplished speaker and presenter, he has presented workshops and seminars for a multiplicity of organizations and business entities.

Coupled with many civic involvements, he served as director of the Bahamas National Pride Association and was responsible for introducing National Pride Week, which has been observed since 1995. He has served as a member, president, and vice president of the Pastoral Council of St. Joseph’s Church, chairman of the National Elocution Contest, and former host of nationally acclaimed television game show “It’s Academic.” He is the former president of St. Thomas Moore Parent-Teachers’ Association and the f St. Augustine’s College. He is a past president of the Men’s Ministry at St. Joseph’s Catholic Church. He also served as the deputy grand knight and grand knight of the Knights of Columbus, a family-oriented Catholic men’s fraternity. Presently, he is the District Deputy of the Knights of Columbus, with responsibility for New Providence.

He has authored three columns in the local press: “Communicating Effectively”, published in the Bahama Journal, “Mastering Yourself” and “Eye on Education” which appeared in the Nassau Guardian.

Generally, he continues to offer commentary on social and political issues facing our country.