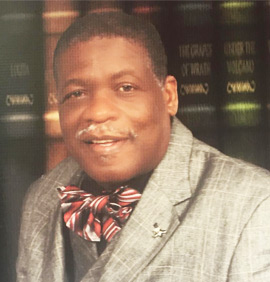 Bishop Arnold Josey, The Uncle Lou Award
Bishop Arnold Edwin Josey was educated at St. Augustine’s College, Bernard Road, Nassau, Bahamas. He attended the Bahamas Baptist Bible Institute, and is the recipient of the Diploma in Christian Education and Pastoral Ministries.  Bishop Josey is a graduate of the F.B.I. Academy, Caribbean Police School, and in 1993, he received a Bachelor of Arts Degree from Louisiana Baptist College, and a Doctor of Divinity Degree from the Virginia University of Lynchburg – Lynchburg Virginia. Bishop Josey in his desire to remain abreast of current trends and developments in the theological world engaged in the Virginia Union Seminary Continuing Education program. At present he is pursuing a Doctorate Degree in Sacred Theology which has allowed him the privilege of sitting in the classrooms of some of America’s most prestigious universities, like Harvard, Yale, Emory and Princeton.

In 1974, Bishop Josey joined the Royal Bahamas Police Force, where he served his country honorably for twenty-six (26) years, before resigning in September 2000, to assume full time Ministry at the Commonwealth Mission Baptist Church.

Bishop Arnold Josey is a dedicated, youthful gentleman, and in 1991 was awarded the Ministry of Youth Award for Youth Leadership. He is a past President of the Bahamas National Baptist Young People’s Department, and a former member of the National Youth Advisory Council. He is a licensed Justice of the Peace, and is involved with The Christian Council’s Chaplaincy Program as a Regional Commander, as well as The North Eastern School Student Re-Focus Support Programme.

Bishop Josey is well known on the radio waves as a former host of the Baptist Hour, and the Caribbean “C.B.F. Presents”. Dr. Josey is the Vice President of the Mission Baptist Consortium of Churches and is the anointed and dynamic Senior Pastor of the Commonwealth Mission Baptist Church, located on Commonwealth Blvd., in Elizabeth Estates, where the invisible Christ is made visible, and the excited membership ‘soars with Eagle’s wings’.

Bishop Josey is the recipient of the Dale Carnegie Diploma in Effective Speaking and Human Relations, and with his God given sense of humor; it is no wonder he is a sought after preacher and teacher for Youth and Adult groups in our nation.  He is also a Justice of the Peace!

He is married to the lovely Vernita, and is blessed with three beautiful children, Davonia, Arnold II, and Alvin Cleveland and four grandsons, Steven, Steffon, Jaheim and Jace.