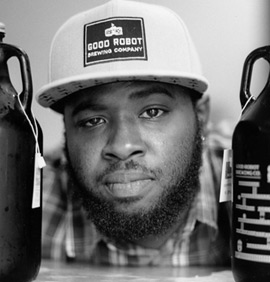 Giovanni Mikhail Johnsonis a young scientist and entrepreneur from Nassau, Bahamas. Graduated from Sac in 2011 and then graduated from Mount Saint Vincent University with a Bachelors of science in Biology 2017. Now Brewer & microbiologist  at GoodRobot brewing company also  Co-founder & HeadBrewer/microbiologist of Limestone group. Giovanni Came to Canada in 2013 after doing a year at the College of the Bahamas. Received sponsorships and bursary’s from the local rugby, rotary community and family to attend university. Prior to leaving for university I worked in retail and hospital pharmacy doing  pharmacy apprenticeship,  also while in Canada worked as a researcher in quality control for a top seafood company and now using my scientific knowledge to apply to the brewing industry. I’m also the first child in the family to get a university degree and believed to be the only black brewer in Nova Scotia!I enjoy being outdoors in nature, playing sports (rugby) cooking and brewing, helping others and celebrating my Bahamian culture!