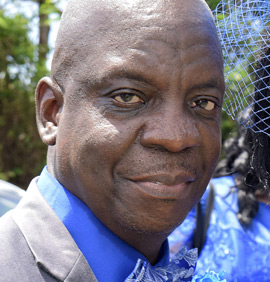 Brent attended St Augustine’s College from 1979 to 1985. During his tenure, he represented the Big Red Machine as track and field as the premier distanced runner.

In his senior year, Brent suffered a shin splints injury that prevented him from competing. He was encouraged to join The Augustine Newspaper where he began writing sports articles on the Big Red Machine’s performances.

Upon graduation, as he went through rehab to return to competition, Brent was employed at Mr. Photo when he was approached by a former teacher, the late Chris Ferguson, who encouraged him to pursue a job opening at The Tribune Newspaper.

A year later, in 1985, Brent began his career as a Sports Writer. While he was unable to compete, Brent was able to provide coverage of every major national and international sporting events from the Carifta Games to Olympic Games.

His journey over the past 30 years has enabled him to traverse every continent except for Africa. Some countries he’s been to at least twice in attending the Central American and Caribbean Games, the Pan American Games and the Commonwealth Games as well as the IAAF World Championships, the NBA, Major League, NFL, boxing and soccer matches.

Outside of his illustrious career, Brent is a devout Christian, who has worked in various capacities at his local assembly at Macedonia Baptist Church and the wider community in the Bahamas National Baptist Missionary and Educational Convention, which honored him for dedication and commitment as a Youth Director and the Director of the Baptist Sports Council respectively.

He is married to Joan, nee Smith since May 11, 1991, and they are the proud parents of four children, Brent Jr, Brittany, Brentisha and Brenae.